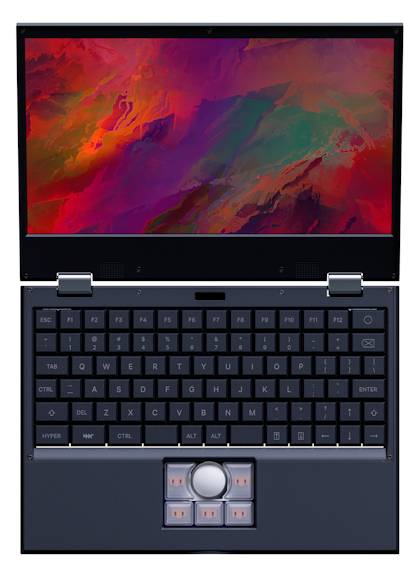 In a world where privacy is an increasingly confused concept, obscured by useless and bizarre regulations of little practical sense, finding a personal computer that is nothing short of serious is almost impossible. Almost, because of the fact that a young German engineer has designed and built one respecting specifications and prerogatives that make it unique and completely in contrast to any other of the same segment. Modern laptops are increasingly Closed Source, that is difficult to repair if necessary, contain firmware and branded software, with codes and firmware often proprietary and with closed source code. Moreover, as if that were not enough, bundleware is in fact an established practice, therefore, here is that the first time our notebook takes all the time to check for updates, preconfiguration of weather forecasts, news of the moment, games, in short, everything except what we have turned on the computer at that time. The information about the electronic components used in the boards inside them are not public as well as their wiring diagrams are not. The batteries are often integrated a bit like modern smartphones, making any replacement a drama. Often the bios, or the firmware of the notebook, does not allow you to use all the functions available from the CPU or in other cases is deliberately limited for questionable legal issues or worse, commercial.

MNT Reform is a personal laptop conceived to go in the opposite direction because it is designed to be completely open hardware and software. Born and grown also thanks to funds raised on crowd supply, as well as funds received from pre-orders, this open hardware laptop works thanks to the adoption of free and open source software, in some cases specially developed from scratch. Users are given complete freedom to explore the electronics of the computer both from a practical point of view, with easy access to the circuit boards and no plastic tabs or joints, and from a documentation point of view, in fact it is thanks to the latter that you could even customize or repair the electronics yourself! There are no integrated control systems and hidden data collection, there are no WebCam or microphone as standard, (But installable at any time) so your privacy in practical terms can be considered safe. Designed and built with ARM / RISC NXP i.MX8M technology with ARM Cortex-A53 64-bit core, boasts a much simpler architecture than conventional intel-inside laptops and therefore make it very attractive to all those who intend to interact even at the development level in addition to productive daily use. Needless to say, there are no constraints on any third-party cloud service as well as there are no contracts or agreements of any kind regarding the tracking of your data by any software included in the OS. This little gem allows you to surf the web, write texts, draw graphics, play music and edit music basically without any kind of compromise thanks to its free software counterparts Office Photoshop publisher and many others. From a graphical point of view you can enjoy 3D acceleration thanks to OpenGL ES 2.0 GPU support, through the etnaviv open-source driver integrated into the Linux kernel, as for the audio, this is generated by a high-fidelity Wolfson DAC.

As already mentioned earlier, MNT Reform is a notebook that goes against the trend, which means that it is designed to last a very long time. From input devices to batteries everything can be replaced without effort, in particular the batteries are replaceable from the individual cells or is given the possibility to directly replace the individual standard 18650 a bit like replacing the batteries of our remote control! Finally we can replace only the elements without throwing away the entire battery management electronics that remains on the notebook. But that's not all, contrary to current design trends where everything is tapered in honor of aesthetics and without regard to practicality, MNT Reform mounts a mechanical open-hardware keyboard composed of Kailh Choc low-profile deep switch, without many words means that it will last a long time and in case of failure can be repaired by replacing only the defective buttons, also the mechanics offers an excellent typing experience and as if that were not enough the keyboard's firmware is open documented and customizable. What you see when you look at the notebook from the photos on the web (being able to approach it live is still a privilege for a select few ...) is not plastic but anodized aluminum alloy sandblasted, a precise design and hallmark that denotes the superior quality with which the notebook takes shape. With a compact and simple mainboard thanks to the technology used, MNT Reform is able to withstand a professional use even in live environments without fear of any kind of particular wear, having no fans inside it will always remain quiet and clean. The transparent pexiglass at the bottom through which you can scrutinize the electronics and batteries protects it perfectly from dust, insects and any other unfriendly agent and allows us to admire all its impeccable simplicity.

It will be available in 2 variants from what you understand from the page on the Crowdfunding website chosen to get the project off the ground, provided that shipping costs are always included worldwide, one version is named MNT Reform Max from the cost of $ 1500 you will be delivered the notebook fully assembled with 1TB of NVMe SSD storage, mPCIe WIFI card, black leather case or purse signed by Greta Melnik, SD card with Linux Debian 11 and the international power supply to charge and power the computer everywhere, is not specified but it is assumed that the notebook comes with the corresponding batteries. The second version is named MNT Reform DIY Kit in practice you get all the parts both the mechanical parts and all the electronics already assembled of course, so it will remain to assemble everything without having to solder anything and saving a little money for the kit costs $ 999 but in this case are not included the WIFI card and the Storage (256 GB SSD NVMe ) that can be added to the kit with another $ 120. It must be said that you can choose the pointing device between trackball or trackpad and the printing of the keyboard I suppose for the preferred layout.

MNT Reform is a notebook that will appeal to many, including me! The need to work with really serious computers like this is increasingly felt by many and is beginning to be so even by non-experts. Maybe in the future we will also see a slightly hainier version maybe 15 or 16 inches where the keyboard will also have a numeric keypad and the FHD display will be less dense than the 12.5 FHD of MNT Rform who knows, the hope is that MNT continues full support for all its current projects as long as possible. If you are interested, you can order it now, but you will have to wait until December when shipping will start.

For all details, illustrative photos and possible purchase follow this link: https://www.crowdsupply.com/mnt/reform